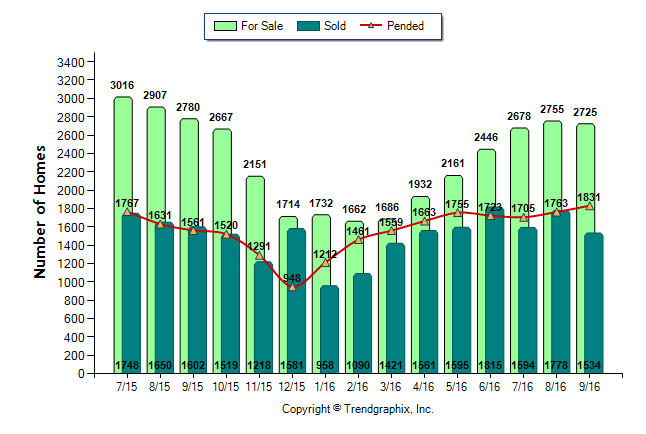 The 2016 Real Estate market is becoming a recurring theme, giving seller’s the upper hand, but the numbers are starting to slow down.

From August to September, the number of homes being listed is down 1.1%. Although the decrease is minor, it’s a noteworthy change in direction from previous months. Despite the (slight) decrease in the number of properties listed, homes are spending more time on the market than they were last month, with closings for September down 13.7%, spending  29 continuous days on the market, up 11.5%. On the bright side, going into next month we may see an increase in closings however, with 3.9% more homes placed under contract than August – that’s up a whopping 17.3% from this time last year!

Although the market is still favoring sellers, prices are beginning to level out. Sellers are averaging 98% of their asking price, with the average Sold Price Per Sqft down 1.5% to $347,000.00. Despite being down 2.3% from last month, the average for sold price is still up nearly 10% from this time last year.

It’s not unusual for the real estate market to slow down in the holiday season, and it’s reassuring to see the numbers positive juxtaposed to last year. Although we are anticipating good things through the end of the year, the election is quickly approaching, and that can definitely have an effect on the overall climate. We are looking forward to seeing what October brings with it as we inch closer toward the end of the year. Check back in the second week of November for next month’s update! 🙂